Mercury In The Food-chain

Once released, mercury persists in the environment - circulating between our air, our water, our soil and the bodies of living creatures.

Mercury bio-accumulates through the food chain, concentrating in the tissue of organisms and is regularly converted into the more toxic form methylmercury by microbial activity. Apex predators like sharks, dolphins, tuna, albatross, eagles and even humans are the most at risk of harm when mercury enters the food chain.

The Minamata Tragedy is an extreme example of the damage mercury causes to humans and other wildlife alike, when large amounts of mercury are released into the environment.

Unfortunately, mercury is persistently released into the environment by human activity - ultimately posing significant long term risks to our health.

Due to mercury's extreme neurotoxicity - government's around the world have recommendations in place regarding human consumption of foods likely to be contaminated with high levels of mercury like seafood.

It is generally recommended to substitute high risk seafood like swordfish, flake and tuna, with low risk seafood like calamari, whiting and sardines - especially for pregnant women and women of child-bearing age.

Methylmercury is able to cross the placental barrier and the blood brain barrier, and accumulates in the brain, kidneys and the foetus in the case of pregnant women. Because of the way methylmercury behaves it poses a much greater risk to pregnant women, women of child-bearing age and young children.

There is much debate between the fishing industry, government agencies, researchers and consumer organizations in reaching consensus on what is the actual permissible level of mercury contamination in fish and seafood. For example, the American EPA in 1996, set a new guideline for methylmercury in the diet: 0.1 micrograms of mercury per kilogram of body weight per day (0.1 µg/kg/day). This is 4.7 times as strict as the World Health Organisation's standard of 0.47 µg/kg/day. 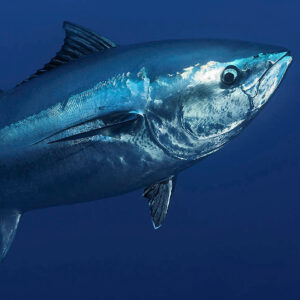 Large predatory fish like marlin, swordfish, tuna, mackerel and shark should be avoided due to high mercury concentrations.

As more research becomes available demonstrating that mercury even in very low doses is very harmful causing life long damage in children, the trend is to lower the permissible level even further. Professor Philippe Grandjean, author of “Only One Chance: How Environmental Pollution Impairs Brain Development – and How to Protect the Brains of the Next Generation” is known for conducting considerable research for almost 50 years into the health effects of mercury in fish, and has spoken out for the maximum levels allowed by the EPA to be lowered by another 50%.

An important flaw of these guidelines that needs to be recognized is that there is no allowance for the preexisting tissue levels of mercury from dental amalgam and other environmental sources. It may be wise for those with dental amalgams to reconsider adding any additional mercury to their existing heavy metal body burden.

As a consumer is important to make conscious buying decisions - choose seafood that is sustainably caught and is low in mercury levels. For guidelines of which species have the highest and lowest mercury levels - visit this page.

In Australia, commercial fishing is our fifth most valuable industry and we consume nearly 50% more seafood per capita than the worldwide average.

Simply put, Australia has a large incentive to reduce environmental mercury pollution and mercury in fish for both economic and health reasons. 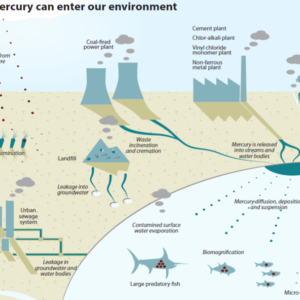 As shown in this image - mercury is released into the environment from a large range of activities like air pollution from coal power, waste water pollution from dentistry, industry activity, landfill, gold mining and even from crematoria.

The mercury in dental fillings contribute significant amounts of mercury to air pollution when bodies are incinerated.

Once mercury has entered the water system, it is converted into methylmercury by mico-organisms and begins to accumulate up the food chain.

The micro-organisms enter the food chain via small fish, invertebrates and other species which are then eaten by larger animals. Marine predators like sharks, tuna and dolphins build up high concentrations of mercury throughout their life. Bird species are also commonly harmed by methylmercury - types of eagles and albatross suffer increased mortality and reproductive problems in areas with high mercury pollution.