Mercury And The Environment

Mercury is extremely damaging to the environment, bio-accumulating and bio-magnifying throughout the food chain.

It is widely recognised by the scientific community that reducing anthropogenic mercury entering into the environment is a critical issue. Mercury can travel extremely far in the air and the water, making any form of mercury pollution a global problem.

Humans and animals alike are vulnerable to harm wherever mercury concentrates in the environment. 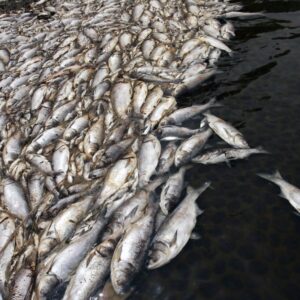 Mercury is found in many different forms - the worst of which is methylmercury. Methylmercury is created from inorganic or elemental mercury which is transformed into the more toxic form by aquatic microbial activity. During the methylation process - the chemical structure of the mercury compound is changed into [CH3Hg]+ or methylmercury. In this form - mercury is easily absorbed into the blood stream and organ tissues through the gastrointestinal tract. The methylmercury binds with amino acids where it can then cross the blood-brain barrier and placental barrier and once bound methlmercury is difficult to excrete - allowing it to accumulate in the organism.1

Mercury readily bio-accumulates, the process where a substance is absorbed faster than it is excreted, leading to a build up of the substance in the animal's tissue.2 If mercury pollution levels are maintained then the mercury will continue to bio-accumulate in the organism, meaning the concentration of mercury is relatively higher in the organism than in the surrounding environment.

The bio-accumulation property of mercury allows it also bio-magnify up the food chain.2 This is where longer living, predatory animals eat contaminated animals from lower food chain levels. The mercury then concentrates in the predator at a relatively high level yet again - with toxic effects compounding.

Because of the chemical properties of mercury such as - methylation, bio-accumulation and bio-magnification, mercury is a very dangerous environmental toxicant even in very small levels. The video below explains the chemical and biological processes well.

The natural environment is becoming increasingly polluted, which mercury pollution being no exception. On average, the mercury concentration in Artic marine animals has increased by 12 times since the pre-industrial period and mercury levels in the top 100m of the ocean has doubled in the last century.3 Precious areas containing much of the world's natural biodiversity like the Amazon, the Florida Everglades and even Australia's Great Barrier Reef are now heavily mercury polluted.4 , 5, 6

Environmental mercury pollution is not only harmful to humans - many animal species also suffer the consequences. In the Amazon, rare river dolphins, turtles and fish are threatened by mercury pollution entering the waterways.7, 8 A recent study in Florida found that the local bottlenose dolphins had the highest ever recorded levels of mercury found in the region.9 Research on our own Great Barrier Reef, has found that the mercury based fungicide - Shirtan, popular in the sugar cane industry, is extremely dangerous for developing coral and may be contributing to degradation of the reef.10 On the Great Barrier Reef, high levels of mercury have been found in the organs of dugongs and turtles, and in turtles mercury concentrations have been correlated to low hatching rates.11

Large marine animals like whales build up high levels of mercury over their lifespan. Tests conducted on whale meat sold in Japan found that some samples contained mercury in levels 5000 times above what is considered acceptable.12 Research has found that stranded marine mammals like whales and dolphins often have high levels of mercury 13, 14. As mercury is known neurotoxin, it is likely that mercury pollution plays a role in damaging cognitive function, triggering what is called 'heavy metal toxicosis' - confusing the animals to the point they beach themselves and die. 13, 14

Bird species like eagles and albatross are also vulnerable to mercury toxicity. Studies have found that mercury damages the reproductive processes of birds, with research on albatrosses finding mercury reduces both the likelihood of birds breeding and then eggs hatching.15

It is quite probable that the havoc elevated levels of mercury wreaks on the natural environment may be playing a role in driving a wide range of animals onto endangered species lists. If mercury pollution continues to rise, as is forecast by the UNEP, then it may become a major factor in the extinction of many diverse and amazing animal species.3

There is overwhelming evidence that mercury harms most animals it comes in contact with - and humans are no exception.

Anyone who cares about their personal health, the wellbeing of their family and friends, and the natural environment must take the issue of mercury pollution seriously. In the long term, releasing mercury in the natural environment from human activity poses a huge risk to our health and the health of everything we share the planet with.

To learn more about the human consequences of mercury pollution - we recommend you read the Mercury And Health page here.